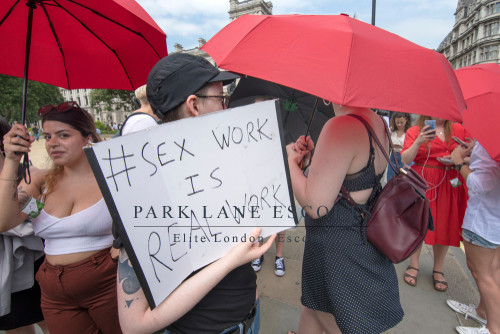 For someone who likes to keep a low profile, Laura Lee is a surprisingly easy-going person. When we meet in central London, she’s dressed elegantly, yet casual in a pencil skirt and heels. She could easily be mistaken for a university lecturer or fashion buyer. Sitting down at a table at a popular coffee shop, her mannerisms are calm and confident. She leans back on her chair with her legs crossed comfortably as she talks about how she got into sex work, why it can be empowering for women, why the laws on prostitution need changing — and what would happen if they were rewritten.

She has a current case, challenging the legality of certain aspects of the Policing and Crime Act 2009 – primarily section 14, which makes it illegal to pay anyone for sex if they’ve been “subjected to force”, or are “controlled for gain”.

Laura’s argument is that these laws unfairly target women working together as prostitutes because they effectively criminalise any two women selling sex together on the basis that one has been coerced by another. She also says there is “no evidence that these laws have any impact on reducing trafficking into prostitution; in fact, they may actually make it harder for workers like her to leave an exploitative situation by putting them at risk of arrest themselves.”

In short: If you’re paying someone to have sex with you, and they don’t want to do it, then that’s considered a sexual assault under this law. The problem is that in practice it can be hard – if not impossible – for police officers on the ground to determine whether someone was forced into selling their services. As such, many people who sell sexual services have been arrested simply because they needed money.

Increase in discrimination against women who need protection.

Laura’s situation isn’t unique. British escorts and sex workers can often find themselves at risk of violence and abuse while they’re trying to do their jobs. The law means that it’s difficult for them to report crimes or seek help when they’re in trouble—but it also means that sex workers are being pushed underground by clients with bad intentions.

“If you’re worried about being arrested, fined or having your assets taken off you, your number one priority is going to be survival,” says Laura, who has been in the industry for 15 years. This can mean working alone rather than with another woman, reducing the costs and risks involved.

“It’s a huge issue,” says Laura. “There are a lot of sex workers who are working by themselves because they don’t feel safe doing anything else.”

In the UK, London escorts and sex workers are increasingly working alone. This is largely due to fears of being arrested or fined, but also because they no longer feel it’s safe to work with other women. As such, they don’t share flat rentals or advertising space as much as they used to.

It is important to note that, while the sex workers interviewed for this article all emphasized the importance of being able to call for help if they need it, none said they had ever needed to do so.

Laura’s case is currently awaiting judgment. If she wins, it’ll be a landmark moment – but even if she loses, at least the issue will have been raised in court and debated publicly. Either way, the next step will be lobbying MPs to change these laws so that sex workers can feel safe again.

How to Date in London

Dating in London Dating in London is a dream come true for anyone who lives here, but the city has also gained a reputation for being one of the best places to find a girlfriend or wife. London is bursting…
23 November 2022

The Best Restaurants of 2022 in London

The Best of 2022 – London Restaurant Guide London is the best city in the world for food. I don’t think we have to convince you of that. But with so many restaurants and so many choices, how are you…
Menu